Here’s a look at this week’s hottest culinary events:

The Swiss gave the world Rolex watches and multipurpose military knives, but their best contribution, in our opinion, was the melty pot of cheese known as fondue. The Melting Pot, 1600 Westheimer, will have plenty of cheese and chocolate to dip at their annual Ugly Holiday Sweater. For $ 34.95, guests will be offered a cheese fondue to start, one per cooktop, then a choice of filet mignon, all-natural chicken breast, teriyaki marinated steak or shrimp as well as vegetables from season and dips. Dinner ends with a chocolate fondue.

Party-dressed guests receive a complimentary Poinsettia cocktail, a glass of Asti Spumante with cranberry juice, and a touch of Peach Schnapps. There will be a number of holiday-themed cocktails for $ 7, including the Christmas Cosmo, Blitzed Blitzen, and Santa’s Little Helper with tequila. Some glasses of wine will be available for $ 5. 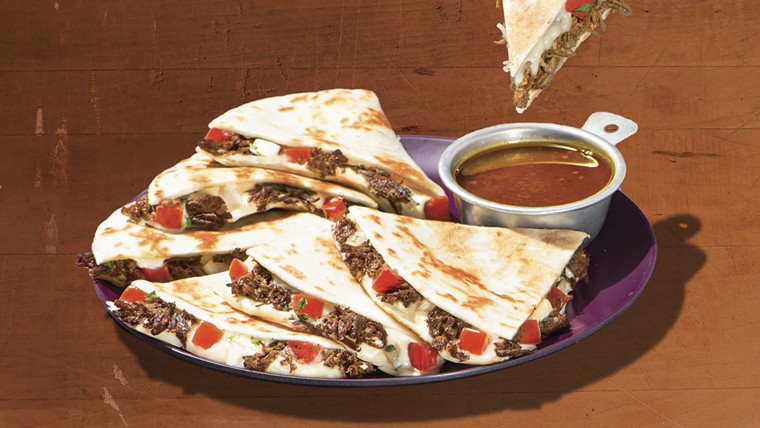 Dip a Taco Cabana quesadilla in a savory birria broth.

Birria tacos appear on Mexican restaurant menus and are served by food trucks across town and San Antonio-based Taco Cabana is riding the bandwagon with its Birria Quesadilla. Two flour tortillas are filled with seasoned beef, melted Monterrey Jack cheese and pico de gallo and served with a side of warm traditional birria broth. Not only is the Cabana launching the new item, but it’s also bringing back its seasonal tortilla soup, made with grated chicken, tomatoes, onions and garlic. The soup is topped with strips of crispy corn tortillas. cheddar and jack cheeses, coriander and lime wedges.

Remember, Taco Cabana also offers 8 flavors of margarita for just $ 2 each. In these days of high inflation, we need a little cocktail of relief.

Patrick Feges and his wife Erin Smith opened the Spring Branch location of their popular restaurant, Feges BBQ, last June, as we reported here in the Houston Press. This will be his new baby’s first Christmas and he will be celebrating with Santa himself, who will be available for photos from 5:30 p.m. to 7 p.m. Elf, will be on the big screens around the restaurant. The restaurant will also collect packaged toys for the St. Mark’s Lutheran Christmas toy drive. Feges Spring Branch is located at 8217 Long Point.

You will also enjoy the retail wine sale on this day. Smith, a former sommelier, will have some excellent grape varieties to offer or drink at 20% off on December 18th.

With its spectacular Christmas trees and twinkling lights, the hotel is a vacation destination hosting private and public events. Her breakfast with Santa on December 18 will be from 8 a.m. to 11 a.m. on the third floor Toro Toro. Santa will be waiting for the children’s Christmas greetings while families will enjoy a buffet breakfast that also includes children’s menu options. The cost is $ 75 per adult and per child aged 12 and over. Breakfast for children under 12 is $ 45. To reserve, dial 713-650-1300.

Santa is a busy and busy elf in December and he will stop by Neiman Marcus in Houston, 2600 Post Oak Boulevard, for a mid-morning breakfast with guests during the special event starting at 11 a.m. . The menu includes buttermilk pancakes, scrambled eggs, bacon, fresh fruits, vegetables, potatoes and juice, coffee or tea. For guests 21 and over, a glass of sparkling wine is offered. The breakfast ticket costs $ 60 and does not include taxes or eventbrite fees.

Julep has the holiday spirit to have a good time.

Julep, 1919 Washington, has decorated its pretty walls with holiday cheer, and patrons will find a seasonal new menu of mouthwatering cocktails like his Apple Butter Old Fashioned and Mulled Wine Sour to take the stress out of the holidays. To truly escape the chaos, try Christmas in the Caribbean ($ 14) with Bacardi Quatro Rum, Appleton Rum, Spicy Syrup, Lime Juice, Grapefruit Juice, and Allspice. There’s also a Spiked Hot Cocoa ($ 14) and its own version of eggnog which features rum, rye, Madeira, and bourbon and real nog ingredients instead of high fructose corn syrup. .

12 days of Christmas in Verdine

This vegan restaurant began its 12 Days of Christmas on December 12 and runs through December 24. Every day Verdine, 449 W. 19th, will be offering specials such as chances to win a bottle of prosecco or wine and drink and dessert specials. Other freebies include a $ 25 gift card on Wednesdays December 15 and 22. Check their website or Facebook for more details.

The restaurant will also host a Holly Holiday Market on December 18 from 11 a.m. to 4 p.m. on its terrace with free bubbles while customers shop. The restaurant, closed on Mondays, takes Christmas catering orders until December 19 for its vegetal menu. Impress your vegan and even non-vegan guests with options like Tempeh Wellington ($ 32) a braised organic and local tempeh fillet wrapped in mushroom pate in a puff pastry and pecan pie ($ 42) that is not only vegan but gluten free because good. There are also a number of starters and sides available as well as a Christmas morning menu.