The Whiskey Room is a cozy living room with an electric fireplace at The Haven’s new location. Photo provided

Even with only eight seats at the bar, the Haven became the best seller of Belhaven, the No. 1 brewery in Scotland, USA. Now, more than 10 years after its beginnings as Boston’s first Scottish pub, the Jamaica Plain restaurant is set to open a new location in the neighborhood. Brewery complex offering double the bar stools, even more beer and single malt whisky, and a warm, updated vibe.

The Perkins Street site in Hyde Square has closed (at least for now), owner Jason Waddleton says, while the Haven awaits final inspections to reopen on Amory Street. June will be a period of “soft-opening”, says Waddleton, with new dishes available as the chef tweaks an expanded menu. The Haven will also be putting the finishing touches on the new decor and adding to its schedule of concerts, comedy and other programming this summer. Mark your calendars for a grand opening in mid-July.

The former Bella Luna and Milky Way lounge has been transformed into a stylish but no less cozy Scottish-style pub. The Haven has grown from seating 60 with a cramped kitchen and no storage to approximately 86 seats indoors, 50 on a private patio and significantly more room for staff in its new location. 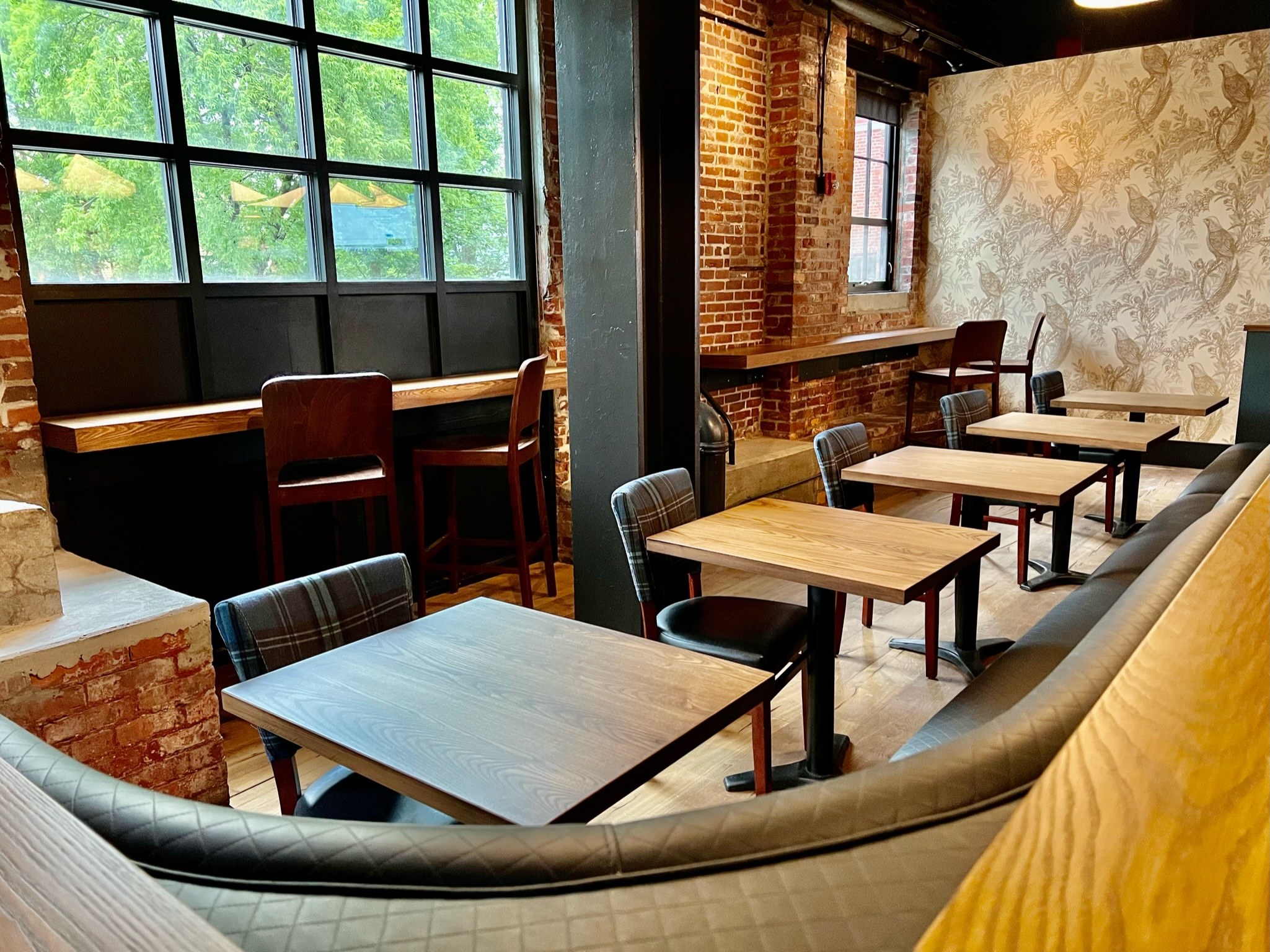 Distinctive dining rooms include an 18-seat bar with a wheelchair-accessible section and ‘the Highlands’, a row of high tables; plus a living room with an electric fireplace called “the whiskey room”. “Speyside”, named after a style of scotch from a particular region, is the new restaurant’s main dining room, with plush benches and counters under the windows overlooking the brewery’s parking lot. ‘The Snug’, with more standard-height tables and chairs covered in blue tartan, will soon be bounded by slatted wall panels in the image of the Scottish flag. Finally, “the meeting room” is a dynamic event space and an overflow dining room, equipped with a small stage, a projection screen and an improved sound system.

Stag antler chandeliers and two walls embellished with dreamy wallpaper from the Scottish design house Timorous beasts are among the design details that update the Haven’s cozy look. Brendan Killian, a local oil painter responsible for the sheep decorating the original Haven, painted a cheeky mural featuring a young Queen Elizabeth II on a wall near the new bar. Boston-born, Scottish-trained furniture maker Dan Wallace of Order of the Arrow Woodworking built the mid-century style shelving for the back of the bar, along with geometric light fixtures and all of the counter surfaces and table tops. Boston firm Zephyr Architects led the redesign. 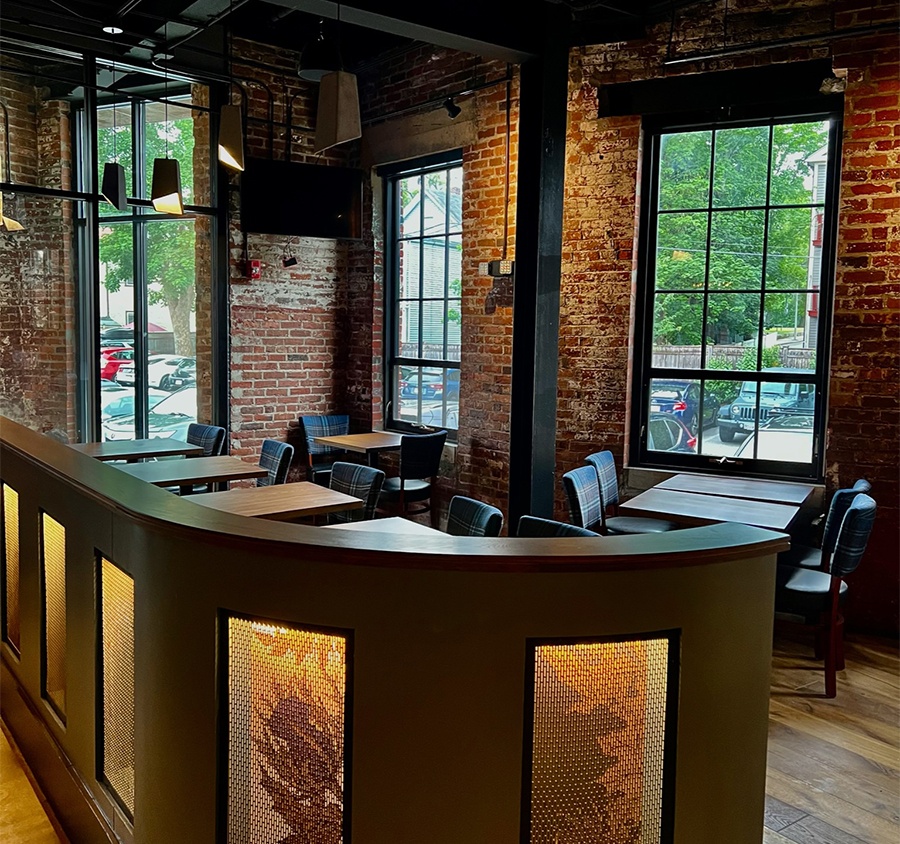 The Snug will eventually be surrounded by slatted wall panels featuring the image of the Scottish flag. Photo provided

The Haven brought in Jamie Kembrey to expand the menu. Taking advantage of the Bella Luna’s old pizza oven, the chef with international experience develops a recipe for pie crust, including one topped with brown sauce and lamb sausage. (He also didn’t rule out pizza haggis.) Other new dishes will include more vegetarian options, like a vegan sausage roll made with homemade seasoned plant-based meat; and a riff on Toad in the Hole that replaces traditional sausage with roasted vegetables. Of course, existing menu favorites like the Haven burger, fish and chips, haggis, cheese platter served with oatmeal cakes, fried Mars Bars and more will make the move to the new location.

Also expect more from the bar. Along with Belhaven, Tennet’s and other Scottish beers, the Haven is adding more local craft beers. The spirits selection has also expanded beyond single malts and other Scottish spirits: new creations include the Highland Margarita, made with tequila and Drambuie; and the Beastie Daiquiri with Ardberg Wee Beastie whiskey and lime juice.

But that doesn’t mean the Haven’s infamous Dram Nights are going anywhere. In fact, monthly expert-led Scotch tastings will return to the new venue, and Waddleton even plans to livestream events like them in the future. Among the meeting room’s A/V upgrades is a camera that can project online, as well as onto the three TVs in the main bar and restaurant, Waddleton says. The first comedy show in the new space is already scheduled for late June, with live music and other events to be announced. 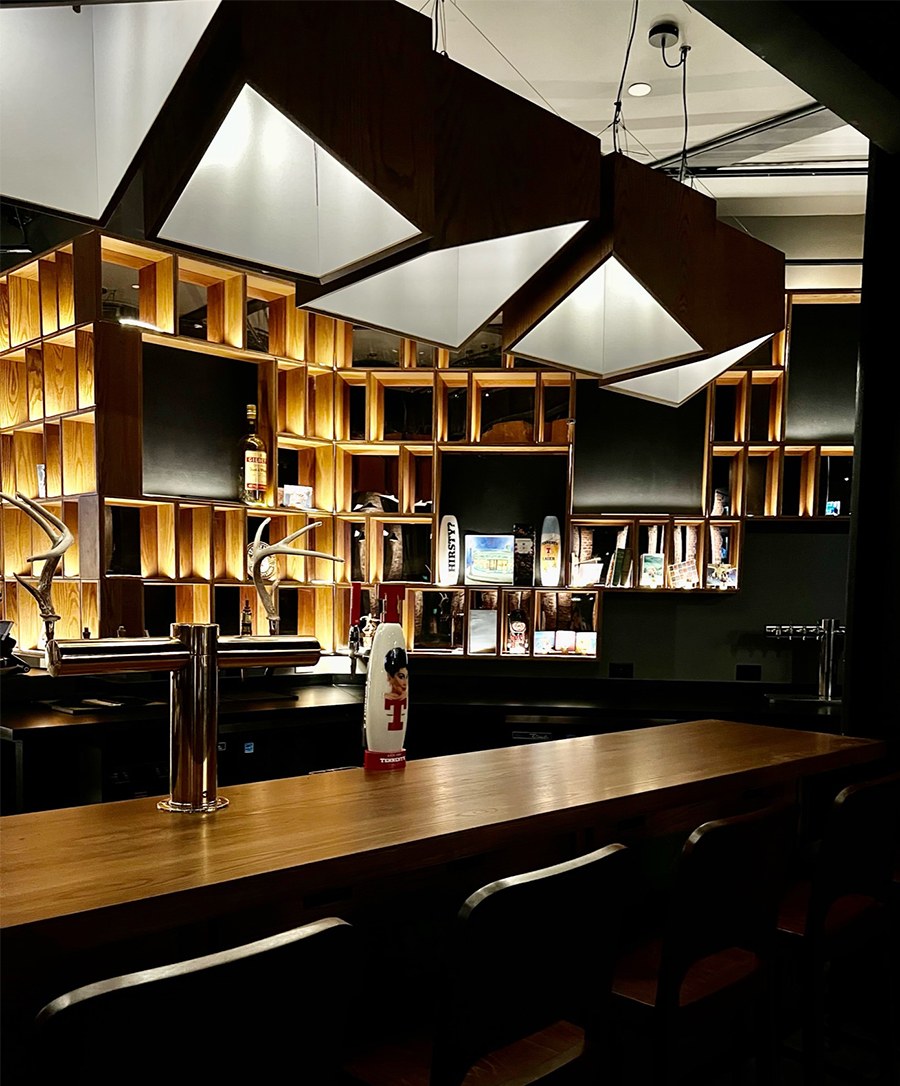 An 18-seat bar in The Haven will feature single malts and more. Photo provided

It’s an exciting time for the tight-knit team behind the Haven, which has about 10 employees, says Waddleton. The expansion will create more opportunities for staff members like manager Michael Carnes, who recently graduated from the Edinburgh Whiskey Academy. “In the restaurant world, we have a niche,” says Waddleton. “Our goal is to be at the forefront of [single-malt whisky and other Scottish fare]and now we have more space to do so.

Meanwhile, Waddleton is not enough ready to say goodbye pub on Perkins forever, but he’s not ready to divulge the possibilities there just yet. For now, his main focus is the brewery, where the Haven will open shortly. Stay tuned for the official announcement.